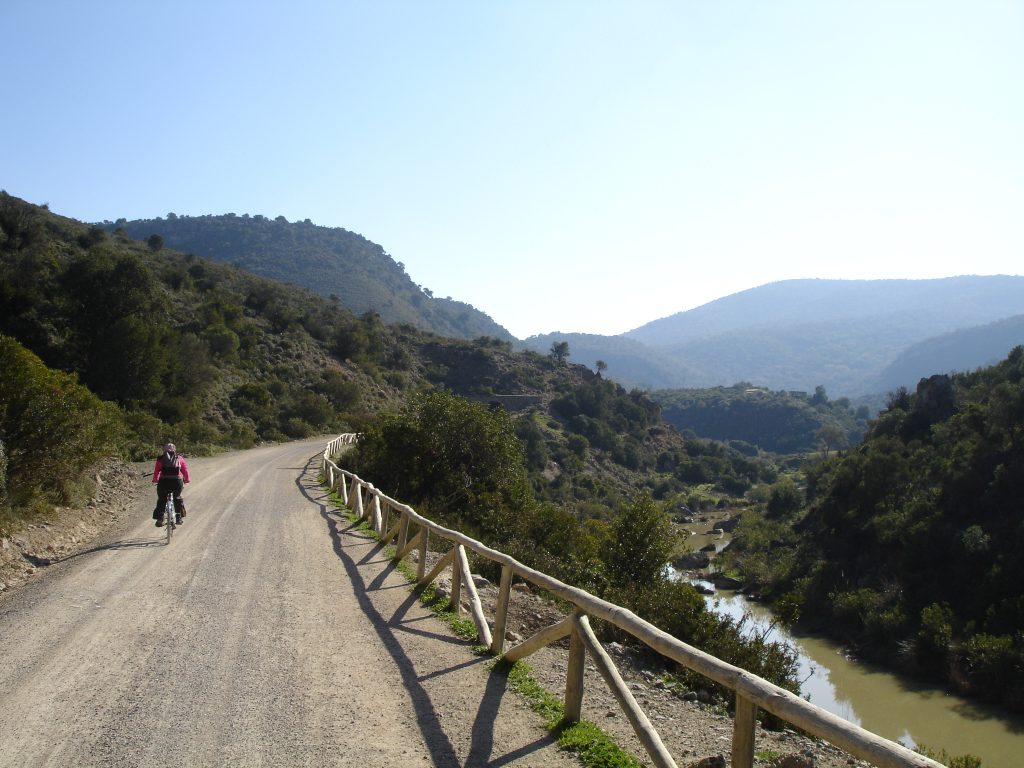 The Vía Verde de la Sierra runs along the old Jerez-Almargen railway line. At present, 36.5 km are passable, distance and the first 8.5 km from Olvera to near the Navalagrulla station runs on asphalt and the following 27 km on gravel road, except for the last kilometer before reaching Puerto Serrano that is asphalt again.

La Via Verde de la Sierra unites the towns of Puerto Serrano and Olvera. Along this route you can enjoy a great variety of landscapes, observing the transition between an eminently agricultural landscape to another mountain, alternating with masses of Mediterranean forest (holm oaks, gall oaks, carob trees, mastic, olive trees, etc.).

In these landscapes, water is the common denominator, following the course of the Guadalete and Guadalporcún rivers, where we find a very diverse riparian vegetation (ash trees, black and white poplars, tamarisks, oleanders…).

It goes over 4 viaducts, goes through 30 tunnels and has 5 stations to rest during its journey. In the following map you can see the exact location of each infrastructure.

Passing Puerto Serrano there is a small climb with little difference in level (+100m approx) the rest is all flat. The route begins at the old Olvera Station, where the “Vía Verde de la Sierra” Interpretation Center is located.

The natural landscape that runs through the Vía Verde, between illuminated tunnels and viaducts that “hang” becoming surprising balconies, is mainly dominated by the influence of the rivers Guadalete, Gaudalporcún and, in the highest part, Gaudamanil. It passes through places as spectacular as the Peñón de Zaframagón, the largest vulture reserve in Andalusia and one of the most populated in Europe.

Subsequently, the Vía reaches another of the recommended accesses, the Coripe Station, to end at the Puerto Serrano Station, which rises above a cliff overlooking the Guadalete valley.

Cycling on the Costa del Sol

This website uses cookies to improve your experience while you navigate through the website. Out of these cookies, the cookies that are categorized as necessary are stored on your browser as they are essential for the working of basic functionalities of the website. We also use third-party cookies that help us analyze and understand how you use this website. These cookies will be stored in your browser only with your consent. You also have the option to opt-out of these cookies. But opting out of some of these cookies may have an effect on your browsing experience.
Necessary Always Enabled
Necessary cookies are absolutely essential for the website to function properly. This category only includes cookies that ensures basic functionalities and security features of the website. These cookies do not store any personal information.
Non-necessary
Any cookies that may not be particularly necessary for the website to function and is used specifically to collect user personal data via analytics, ads, other embedded contents are termed as non-necessary cookies. It is mandatory to procure user consent prior to running these cookies on your website.
SAVE & ACCEPT