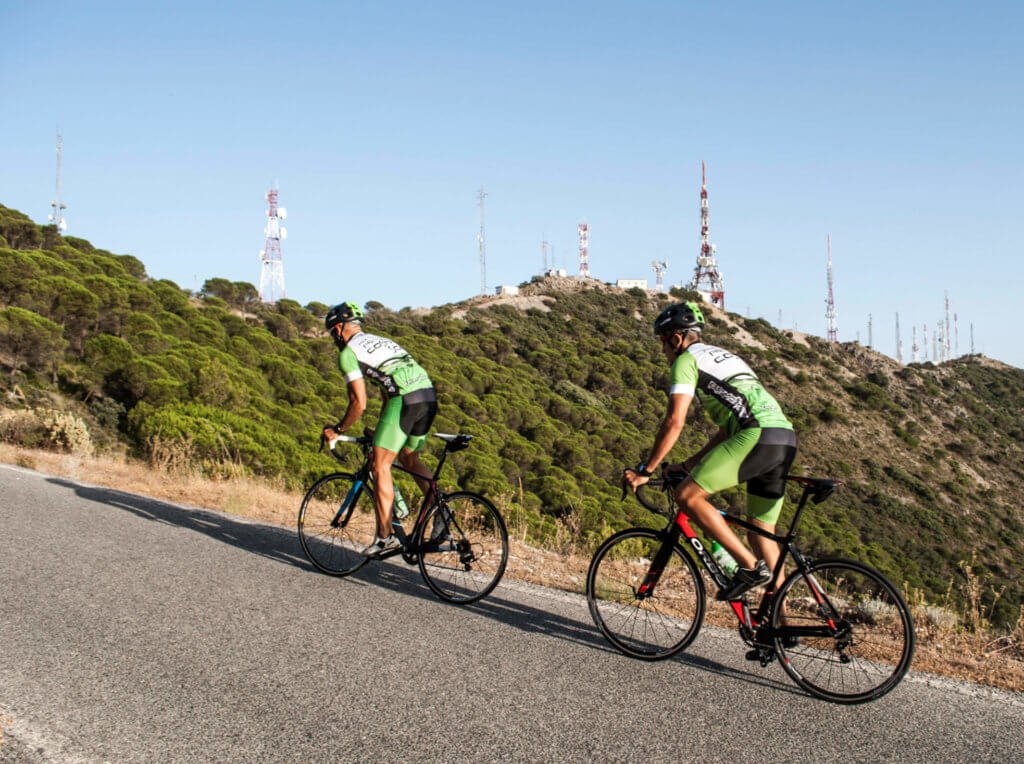 Costa Del Sol is one of those privileged destinations that offer ideal weather for cycle all year round. Although the most popular cycling seasons are very similar to all other: from February to May and September to October, cycling during the summer months is also very popular.

Winter months on the other hand can be relatively very cheap with roads less busy, making Costa Del Sol a great alternative to popular Majorca.

WHY CYCLE IN MALAGA?

Why chose Málaga? Because the area is great for all levels of cyclists, from beginners to pros, mountain bikers or road cyclists.

Whether it’s a gentle excursion along the seafront or a mountain climb that has your legs ready to pack up, Malaga province has routes that will suit all of you.

Here are the spots you need to know about if you’re heading out on two wheels in southern Spain:

MIJAS LOOP AND THE ANTENNAS

A loop around the Mijas Mountains. Head towards Torremolinos, and then head North towards Churriana. Go West always along the mountain side towards Alhaurin. Then climb, towards Mijas for a small break and a coffee stop, before heading straight out for the highest climb of the day: The Antennas Climb. A 5km climb with 10% Avg. grade.

You will need your camera at the top for some breathtaking photos. If you wish to extend your ride, after Alhaurin el Grande, turn right towards Coin for an extra 16Kms.

Malaga province is famous for its coastline, but it’s also worth exploring inland. Some of the region’s most dramatic mountain biking is to be enjoyed in and around the El Torcal Natural Park, close to the town of Antequera.

Owing to the mountainous terrain in this region, the cycling is more demanding than it is on the coast, but it repays the extra effort. A route of about 18km takes you from Antequera along a winding (but well maintained) road with spectacular views of El Torcal, to the town of Villanueva de la Concepción.

If mountain biking is more your thing The Montes de Malaga Natural Park contains some of the most scenic off-road trails found anywhere in Malaga province.

The route climbs steadily through the pine forest to an altitude of 900 metres, taking in the Mirador del Cochino where you are rewarded with incredible views of Malaga Bay. The beauty of this route besides being away from traffic is that the way back is downhill all the way.

Ronda is one of Malaga province’s star-attractions. Perched either side of a deep gorge, its two halves are connected by a stunning eighteenth century stone bridge, This one of Andalusia’s greatest architectural marvels.

It is also a superbly-positioned base from which to explore the many cycle paths in the surrounding Serrania de Ronda. Due to the rugged, hilly landscape this can be demanding cycling but, as in El Torcal, the natural beauty by which surrounds you, worth a little pain.

Still not enough? We have listed our top routes recommendations so you don’t miss out anything on your next Cycling trip!

Cycling on the Costa del Sol

This website uses cookies to improve your experience while you navigate through the website. Out of these cookies, the cookies that are categorized as necessary are stored on your browser as they are essential for the working of basic functionalities of the website. We also use third-party cookies that help us analyze and understand how you use this website. These cookies will be stored in your browser only with your consent. You also have the option to opt-out of these cookies. But opting out of some of these cookies may have an effect on your browsing experience.
Necessary Always Enabled
Necessary cookies are absolutely essential for the website to function properly. This category only includes cookies that ensures basic functionalities and security features of the website. These cookies do not store any personal information.
Non-necessary
Any cookies that may not be particularly necessary for the website to function and is used specifically to collect user personal data via analytics, ads, other embedded contents are termed as non-necessary cookies. It is mandatory to procure user consent prior to running these cookies on your website.
SAVE & ACCEPT